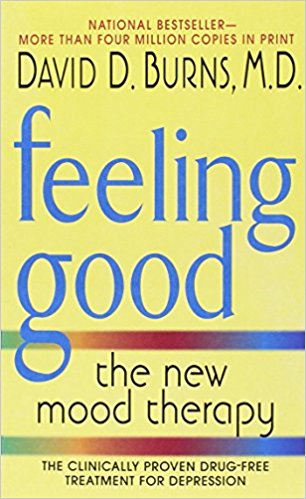 To me the best part of his his bestseller book Feeling Good, the New Mood Therapy (according to some the best self-help book) was the ten types of distortive thinking.

It reminds me of another most modern bestseller Thinking, Fast and Slow by Daniel Kahneman.
Burns believed that our mental state including anxiety, depression, panic disorder is the product of the long-term wrong thinking habits. This was very interesting to me as I could ascribe those various distortive thinking patterns to the planets and research them on the charts. According to the cognitive type of psychology the most important causes of any mental problem (or mood disorder) like depression or anxiety are the following wrong thinking patterns:
I don’t know if anyone else did it before but my approach would be as follow:
All these thoughts are destroying the equalibrium of the mind. The mind is ruled by Moon and its enemies are the nodes, mars (which lords the sign in which Moon is debilitated), saturn (which can cause gloomy thoughts) and mercury (which dries the mind causing various mental imballances). Sun joining Moon cause amavasya (new moon) and is also trouble maker.
If we take those enemies of the Moon and first ascribe them to some general distortions we would have:
Nodes (esp rahu) are showing errors, lack of ballance, hallucinations (seeing too much) or blindness (no information).
Ketu shows ignoring things and repeatative actions (as habit).
Sun is causing atma (soul/strenght/satva) issues.
Mars cause hastiness, anger, one-pointedness.
Saturn shows darkness, laziness, emptiness, lack of knowledge, inaction.
Lets see the list now:
Based on that we have:
Now, where to look in the chart for these? There are many layers in the subtle body or mind (6 according to Aurobindo) so also we need to take into account these.
How this can be used?
For now we will focus on the most external layer which is Rasi Chart (D1), altough the final analysis should involve also navamsa, bhamsa and especially Parashara-trimsamsa (D9, D27, D30) charts.
We could also use the rules to show genetic connection (Sun, Charakarakas, Arudhas, 11H), involvement of distorted prana (pranapada), loosing control (badhaka), anxiety (4H), how this restrict the freedom like in agarophobia (12 from Atmakaraka), or if it is chronic (Karakamsa), or leads to suicide (AL3). We could also see which equalibrium in the ayurveda scheme is afflicted (D30), if the problem is easily remedied (navamsha), who could be helpful (upagraha) and what karmas brought it (d60).
In D1 the kendra have the inner-solar system planets as bhava karaka. First, forth, sevent and tenth have Sun, Moon, Venus and Mercury respectively as the domain lords. Mind is ruled by the Moon so we are focusing on the forth house and especially the kartari trio of 3rd, 4th and 5th.
Among them Parashara says that 3H shows duscikya which are ‘bad’ or negative thoughts, and also the Rishi says that we should see 3rd from Mars together.
For any cognitive distortion we need the Ascendent lord (lagna lord). So we could say that cognitive type of therapy assumes that Lagna lord distortion (handling thoughts) is related to 4H/Moon problems. We could also say that those with the link in the chart will benefit more from this type of therapy.
I didn’t research this on multiple mood disorder charts, but I will show one approach to testing this:

In this chart 3H is Leo and 3H from Mars is Aquarius. Rahu lords Aquarius and is in Lagna aspected by Mars. So we have Rahu and Mars.
Based on the Navamsa, Mars is better candidate for causing distortive thoughts and set of Mars is (1) All or Nothing,  (2) Overgeneralization, (5) Jumping to conclusion, (8) ‘should’ statements, (9) Labeling.

In this chart, 3 from Lagna is Jupiter aspected by Shani and nica (like Shani). 3 from Mars is Moon with Shani and has aspect of Rahu and lord is with Mars. Lagna lord is with Mars and Lagna is aspected by Rahu.
So we have Shani (kartari on Lagna), Mars and Rahu. Mars is with Lagnesha and with with Mars3 Lord, which shows again  (1) All or Nothing,  (2) Overgeneralization, (5) Jumping to conclusion, (8) ‘should’ statements, (9) Labeling.
The 3L and Moon and Lagna however suffer from Shani, this points rule more passive state which would be then dominated by (7) emotional reasoning, (4) disqualify the positive.

In this chart, 3 from lagna is Moon with Shani. Lagna lord  Moon (which also lords Vrsa or Tarus) is with Shani (+badhakesha). Mars3H has Sun issues and Lagna lord is aspected by Mars, the other lagna lord Moon has Mars and Sun kartari with the Sun nica being in Ma3.
Hence the Sun being also Atmakaraka indicates:  Sun – (5) Jumping to conclusion, (8) ‘should’ statements,  (10) Personalization, the Mars part will bring: Mars – (1) All or Nothing,  (2) Overgeneralization, (5) Jumping to conclusion, (8) ‘should’ statements, (9) Labeling
What do you think about this approach to ascribing of grahas to those thining patterns? Would you do this differently? How?