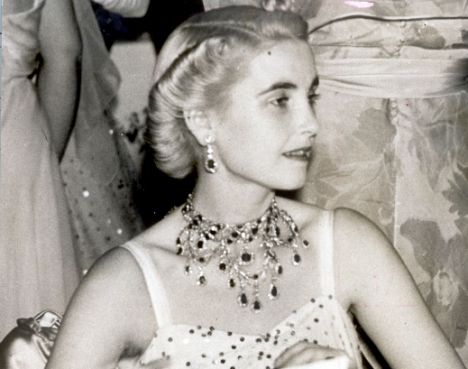 Astrology: Nodes in 1/7 axis gives problems with fedility and promotes many partners (based on the classic : Sarvartha Cintamani). 7th lord is also with 10th lord as Venus – Darakaraka is in 10th which also promotes many partners. Grahamalika ends with Moon joined Darapada (A7) with Arudhalagna which gives easy access to relationships and wealth. Venus is in Vrscika Navamsa (bahustri yoga – many partners).

“Her inheritance was estimated between $100 million and $500 million which she proceeded to spend with abandon”.

Astrology: 2nd lord (wealth) is in 8th house (inheritance). Jupiter is joined 11th from Arudha Lagna promoting wealth from grandfather. As the dispositor is with nica graha its lot of money, whilst its position in 8th aspected by Śani confirms inheritance. 12th lord in Lagna is the yoga for spendthrift. 3 minutes later Navāṁśa changes to Tūḻa and 10th lord is with Jupiter (grandfather’s money). This change to Tūḻa should be checked with other events. For example we see that 1st marriage occured in Rahu-Rahu (obstructing Śani – loneliness – both from Upapada and lord from Upapada) and Rāhū is in arthakona from 7th house whilst 3rd marriage has occured in Rāhū-Ketū , and Ketū is in 9th house which accurately shows the period for the 3rd marriage. Hence the Tūḻa Navāṁśa can be seriously considered.

“A very shy child, her mother died when she was four”.

Astrology: It was Moon-Rāhū. Rāhū is only aspected by Jupiter which is also the dispositor so its results it will give. The death of relative is normally in the period of the maraka from the particular house. Maraka are 2nd and 7th bhavas. Treating forth as maraka: Moon and Jupiter will form the maraka lords and it was that period when the demise of mother has occured.

“Her habit of buying her way into and out of relationships was something she did throughout her life. At age 20 she married Prince Alexis Mdivani of Georgian Russia. After a second honeymoon she obtained her freedom by settling $2.25 million on him”.

Astrology: Upapada (relations) is in 2nd house (wealth) and 11th lord (gains) from Upapada (of husbands) is in Lagna (native) which shows that partners/husbands gain money from the relationship.

Astrology: Child was born in Rahu-Guru. The strongest argala on A5 (children) is of Budha-Guru yoga in 9th house. Guru being stronger and natural kāraka for children has given the birthchild. Guru is also 9th house which is house of children for women (stri jataka). In D7 Jupiter is in 12th from 12nd lord which is accepted for the birth of child, Venus is Dhanus shows sex as male. He died in 1972 in Shani-Shukra-Shukra period. Again the principle of maraka works nicely from Mantrapada. Śani is in 2nd (maraka) from A5, Venus lords the 7th from A5. 3rd from A5 is aspected by Ketū (accident) and Venus (vehicle) as the cause of death.